Wild rabbits are causing erosion and eating fragile upland plants in one of Scotland's most striking landscapes, according to a new report.

The Storr is the highest point on the Trotternish Ridge on Skye and features the Old Man of Storr rock formation.

Results of monitoring of the ridge by researchers suggest reducing rabbit numbers to help to protect the Special Area of Conservation. 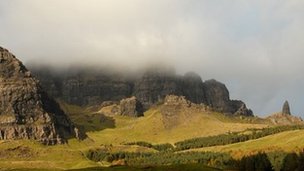 The Storr and the Old Man of Storr on Skye

Declines in sheep grazing on the ridge were also deemed to be beneficial.

The Trotternish Ridge is owned by the Scottish government.

Historically, it was taken over by the state in 1904 and made available to crofters who had been forced off the land during the Highland Clearances in the 19th Century.

Upland plants, including rare grasses, grow on the ridge and have protection under Special Area of Conservation and Site of Special Scientific Interest designations.

Scientists from the Macaulay Institute, now part of the James Hutton Institute, carried out long-term monitoring to help assess the impact of grazing sheep and rabbits.

In their report for Scottish Natural Heritage, they suggested fewer sheep would reduce erosion and loss of plant life.

The scientists said a decline in hill sheep farming may lead to this situation without the need of intervention.

However, they said rabbits would need to be controlled because of their "significant" contribution to erosion.

The report said numbers of the animals, thought to have been introduced to Skye in the 1800s, were "high" around the base of the Storr.

The scientists said: "It is recognised that controlling rabbit numbers could be an expensive exercise which would require an ongoing commitment of manpower and finance.

"The possible benefits, in relation to the costs of rabbit control on a scale that would achieve noticeable benefits therefore require greater consideration before further action is taken."

Love your Neighbour;yet don't pull down your five fingers shoes.