I came across these links (see below) about British actress Sue Johnston, who says she was one of Brian Epstein's secretaries during the Beatles heyday.   She's from Liverpool and said she knew all the Beatles and spent time hanging out with Paul.    You might recognize her from "Downton Abbey," she played "Denker," the Dowager Countess's maid during the last season.

Was wondering if someone could check Mark Lewisohn's book and see if she was interviewed about her Beatle  memories?

Another British actress, Alison Steadman, is from Liverpool also, and she was a regular Cavern go-er in her teen years.  She's known for playing "Mrs. Bennett" in the 1994 version of "Pride and Prejudice" (with Colin Firth as Mr. Darcy), and also played the mother-in-law in the "Worst Week of My Life" series.   Don't think she was in Lewisohn's book.

I've just checked the credits and as far as I can see, neither Johnson or Steadman contributed to the book in any way. Perhaps they might to vol 2?

Did you submit the names of those people to Mark? Vol. 2 won't be out until probably 2023.

Did you submit the names of those people to Mark? Vol. 2 won't be out until probably 2023.

No I haven't... I can do that, and if he hasn't contacted them yet maybe it can be of help.

Two other people that I thought of for him to know about are actors Sir Ben Kingsley, and Anthony Powell (who played Jesus in "Jesus of Nazareth")... they were in a rock group together in the 1960s, they knew each other from their schoolboy days, and they also knew Brian Epstein and the Beatles... they heard them play and gave them advice on a music career.  Both men decided on an acting career rather than music however.

Correction to previous post... it should be R0BERT Powell, not Anthony, who starred in "Jesus of Nazareth"

This is a clip from the documentary "Beatles Stories" where actor Ben Kingsley shares his memories of Brian Epstein and John and Ringo.  Robert Powell and Ben Kingsley composed and performed music in a play Brian produced.

Hooten & The Lady actress Jane Seymour: My six best albumsJANE SEYMOUR, 65, is famous for her role as Solitaire in the James Bond film Live And Let Die. She starred in the TV series Dr Quinn, Medicine Woman and is now appearing in the series Hooten & The Lady (Sky1, Fridays at 9pm).

Every Christmas, growing up, my present would be the new Beatles album. I had the privilege of knowing Paul because he did the theme to Live And Let Die. When he tapped me on the shoulder at the premiere and said, “I thought you were wonderful”, I fainted. They’re still my favourite band and I listen to Beatles Radio in my car every day. 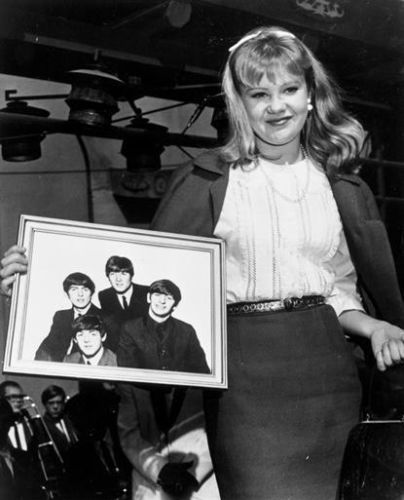 Hayley came out right away as  a Beatles fan in 1964.   Although I don't think she sounded too great of a fan saying that they weren't good looking or good musicians.    However, Beatles fans already were Hayley fans and after she said she loved the Beatles,  well---it didn't hurt her popularity any. 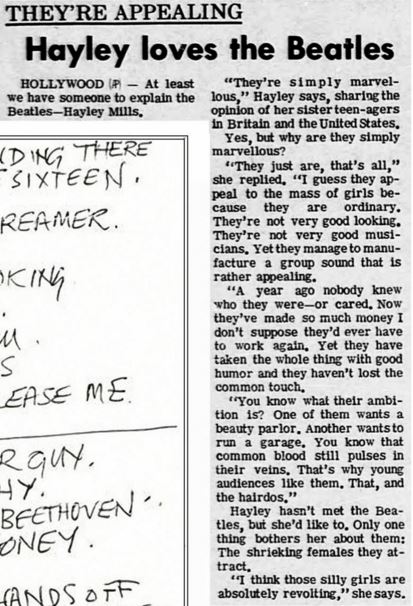 In March of 1964, Hayley's mother arranged for her to have George Harrison be her date for a charity performance of a film.   It was some sort of an auction and a date with a Beatle was the prize.   By then, George had just met Pattie and wasn't interested in almost-16 year old Hayley Mills.   But the next month, Haley appeared again with the Beatles (well all except John) at the Pickwick Club where she was photographed chatting with Ringo.   The press had a field day with that, and rumors flew like wild that Hayley and Richie were dating.

The last connection that I know about is in 1966 Paul McCartney wrote the musical score for Hayley's film "The Family Way."    I am not sure if Paul and Hayley met each other during that time, although it wasn't necessary since she was the actress and he was supplying the music.

0n August 25, 1965, Hayley and her older sister Juliet Mills ("Nanny and the Professor") attended a charity lawn party in Los Angeles, thrown by the head of Capitol Records, where many celebrities met the Beatles.

Haven't been able to find any quotes or interviews where Juliet mentions meeting the Beatles, but she must have memories of that day.  At that time, she was about 23, and was married for 3 years with a small baby.

Juliet Mills with her sister Hayley

See photo of Hayley Mills with Ringo at lower right. 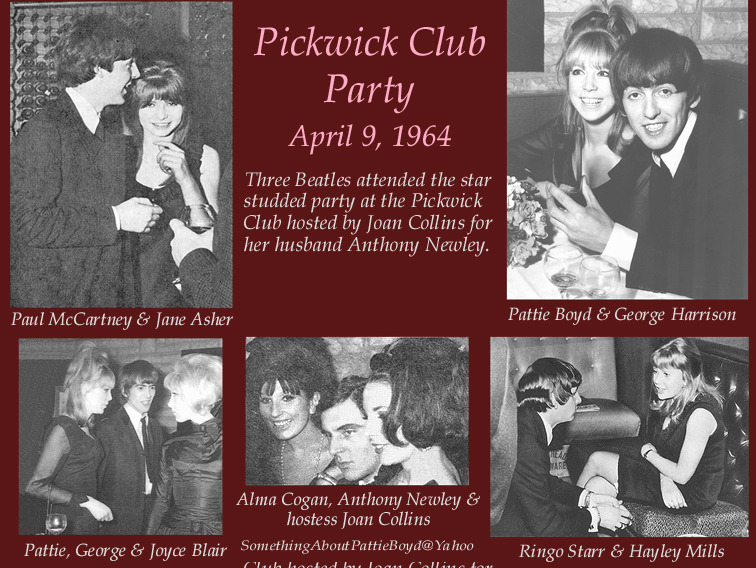 Hayley Mills shares another memory of the Beatles

Flashback: When John Lennon tried to shame Judy Garland about a suicide attempt

By July 1964, John Lennon and the Beatles had triggered Beatlemania in the UK and taken America by storm by performing on “The Ed Sullivan Show” and landing 12 singles in the Billboard Hot 100 chart.

Twenty-four-year-old Lennon, leading the so-called Youthquake, and 42-year-old Garland, representing the outdated Hollywood studio system, were among the entertainers at the Palladium to perform for the annual “Night of the 100 Stars” charity benefit. Queen Elizabeth II was in the audience, and Laurence Olivier was another star on the bill.

Also on the bill that momentous night was Disney child star Hayley Mills, as she recounts in an interview last week on film critic Leonard Maltin’s Maltin on Movies podcast.

Mills said she met the Beatles for the first time that night backstage. She was 16. For their performance, the Beatles performed two songs and acted in a ballet sketch that had them being suspended high above the stage.

Mills said she would get to know all of the Fab Four a few years later when she went on a single date with George Harrison and when Paul McCartney scored the soundtrack for her first “grown-up” movie, the 1966 working class comedy drama “The Family Way.”

When asked who her favorite Beatles was, Mills, who also starred in “Pollyanna” and the original “Parent Trap,” said, “It’s so hard to choose.”

“They’re all so wonderful and brilliant and unique,” she said. “I adored all of them, but I was a little bit in awe of John. He was so smart and you never knew what he was going to say next.”

Meanwhile, Starr was “great fun, really fun,’’ she said before getting around to Harrison. She admits she still has a soft spot for him, “an extremely soft spot. I went out with George, but only once, only once.”

That night at the Palladium, Mills said she also she got a taste of the way you could never predict what the famously wry, sometimes cruel Lennon would say next.

For example, that night Lennon said to the crowd: “Those in the cheap seats clap, those in the expensive seats rattle your jewelry.”

But then Garland became the target of one of his quips, and his comment was definitely on the cruel side, as Mills explained.

Numerous biographies point to the fact that Garland struggled for much of her life with addiction to alcohol and various prescription medications and was prone to debilitating bouts of depression... Moreover, she had attempted suicide multiple times...

One of those suicide attempts apparently occurred just before the Palladium concert. According to a 1964 United Press International account, Garland had gone “to hospital” in London for what she claimed were “accidental” cuts to her arms...

Mills said she arrived at the Palladium looking “wonderful.”

“She had just come out of hospital and was wearing a wonderful red sequened sheath dress with long sleeves,” Mills said. “There were sequins everywhere.”

At this point in her interview with Maltin, Mills wondered if she should go on but figures she’s come this far already. She continued, saying that she was in the wings with the Beatles when Garland walked on stage.

“There was tremendous applause and then there was a lull before she started to speak or  or sing,” she said.

“And in that lull, you suddenly heard John’s voice, yelling out, ‘Show us your wrists, Judy!’”

Mills said, “There was an awful pause as you can imagine.” But Mills adds, “I don’t think she heard. I hope she didn’t hear.”

Mills reflected that Lennon’s bitterness probably stemmed from the fact that he had a hard life growing up...

If Garland heard what Lennon shouted to her that night, she didn’t let it affect her performance.

She essentially stole the show, inspiring the kind of excitement the Beatles typically generated on the “Ed Sullivan Show” and everywhere else.

The audience jumped to its feet for Garland, “cheering, stamping and shouting ‘sing, Judy, sing,’” according to UPI.  They cried for her to deliver “Over the Rainbow.” Her performance brought down the house.

Then she gave the crowd an encore of “Swanee.”

(He wanted to say "rattle your f-ing jewelry" but Brian talked him out of it. He was probably terrified John would still say it!) 😂

(He wanted to say "rattle your f-ing jewelry" but Brian talked him out of it. He was probably terrified John would still say it!) 😂

Noticed I made a small typo in my last post...

Hayley was with the Beatles at the Palladium in 1964, not 1965... so the rattle your jewelry remark was the year before that.

Actor Rufus Sewell (born 1967) is another celebrity with a Beatles connection.  His father, Bill Sewell, did the animation work for the "Lucy in the Sky with Diamonds" sequence in Yellow Submarine, and most likely met with the Beatles to discuss what their creative vision was, prior to starting production.  Bill Sewell died in 1977, so it's possible he gave interviews in magazines or books about his work on Yellow Submarine.

.... his father, Bill... died when Rufus was ten.   Bill Sewell, an animator, employed an impressionistic approach to Rotoscoping—the technique of tracing over film negatives—in his own film “Half in Love with Fred Astaire” and then in the famous “Lucy in the Sky with Diamonds” sequence in “Yellow Submarine.”